Can I Conceal Carry Two Guns? 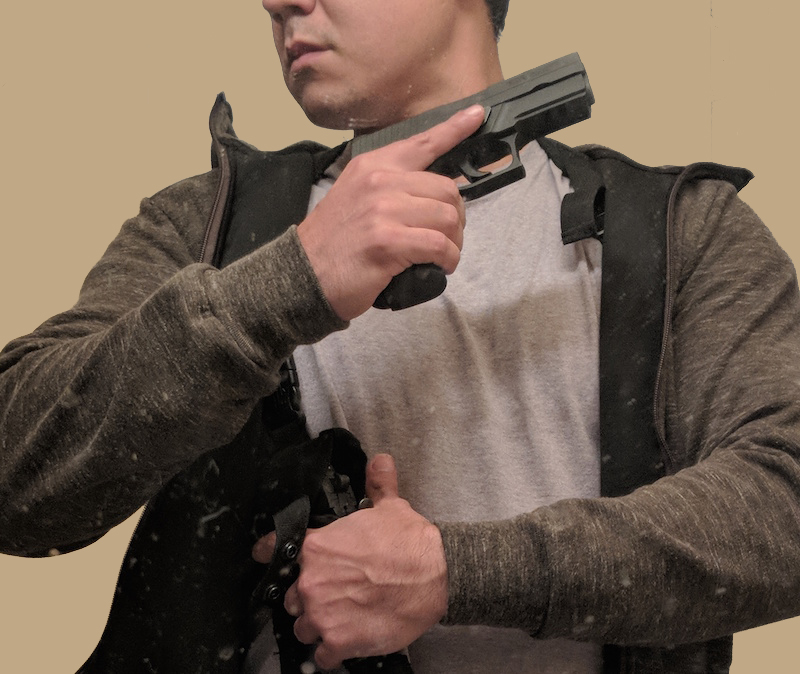 It’s rare, if ever, that you’ll be required to use your concealed weapon to protect your life or the life of loved ones. However, in the event that you do, what are the odds that your weapon will jam? Probably astronomical if you’ve bought a reputable brand. Nevertheless, a second firearm would increase your chances of survival should the worst happen.

So, the question becomes, can you conceal carry two guns? The short answer is yes, you generally can conceal carry two guns. The exception being New Mexico (according to the NMDPS website FAQ’s), but I was unable to find a corresponding NM code. However, you should check the statutes of your county/state for verification.

While some in the community may disagree with my assessment, I also think you should carry multiple firearms. Being prepared for as many different situations where you’ll need to use your firearm increases your chances of survival.  I’ll explain more about why you should carry two guns, and what some different schools of thought are when concealing 2 handguns.

I figured the best way to explain my case is to first dissect the counter-arguments to carrying multiple weapons. The primary reason I’ve seen discussed is that carrying a single firearm and peripheries is a burden in and of itself. Carrying a second weapon only increases the burden on the user. Really? By that logic, you shouldn’t carry a weapon at all. I mean why not forego the carrying of any firearm, it’s obviously a burden to do so?

The second argument is that having multiple firearms is dangerous. I agree with this statement to a very small degree. Sure, carrying an additional firearm comes with increased risk. Carrying a firearm in general means increased risk.

Why I Suggest You Carry Two Guns

First let’s get this out of the way, as far as I know, there is no law stating a concealed carry permit holder is restricted to carrying a single firearm. Just because you can do something, doesn’t mean you should do it. However, thinking logically through things, here’s a couple of examples of when having multiple guns might be the optimal choice.

First, let’s imagine you are in a life-threatening situation, and you pull your firearm. You discharge your initial round and miss. Following the recoil, your firearm proceeds to chamber another round. There’s a problem with the feed, and a bullet has now lodged itself preventing the slide on your automatic from moving forward. What do you do?

This very scenario occurred several times with my first 1911 model pistol. I had a Rock Island Armory version, and it was garbage. The pistol was super finicky and required only specific ammo lest it jam. Multiple times, I had to fish out a live round that was jammed, while shooting at the NRA range. I have since gotten rid of that for a Taurus 1911 model, which is much more reliable. However, had that occurred when I really needed the weapon, I likely wouldn’t be writing this article for you today.

The second scenario, you enter an alleyway in your neighborhood and notice in the distance a group of shady individuals, and they don’t look to have the best of intentions. You glance over your shoulder and notice several more approaching from your rear. They total more than the 7 bullets in your mag plus the one in the chamber. What do you do?

I believe in the military it’s referred to as “violence of action.” While watching a military documentary, a sniper came across multiple enemy combatants while carrying his rifle. He immediately dropped his bolt action rifle, and grabbed his sidearm, and simultaneously discharged his sidearm while advancing on their position. Fortunately for him, the enemy retreated despite having their quarry outnumbered.

My point is, having multiple weapons increases your violence of action. Not only are you firing in multiple directions at your assailants, but you also have twice the firepower, and make twice the noise. Just firing the weapon, accurately or not, could mean the difference between being overwhelmed by numbers or scaring your attackers into retreat.

If you are ever in a scenario where you have to engage multiple assailants, and you are with a friend who is proficient with a firearm, wouldn’t it be great to arm them as well? I don’t recommend giving your firearm to anyone unless the situation is dire. In light of recent events, this would include a situation where there are multiple active shooters.

I have many friends who are military or firearms enthusiasts. While they all typically carry “plan B” a.k.a. a knife, many do not carry concealed on a regular basis. However, I have the utmost confidence in their ability to neutralize a threat and watch my back should the need ever arise.

Keeping all persons in danger alive, including myself and loved ones, is my top priority. I feel better giving them any edge I can in their struggle to survive, should an active shooter situation arise.

Now that we’ve established the types of situations that would warrant a second firearm, let’s tackle how to effectively carry two guns. We’ll start by addressing any valid concerns from the arguments section. First, carrying multiple weapons, including extra mags could easily make someone prone to printing. Generally speaking, I can understand that it would be cumbersome.

You could effectively eliminate the need for carrying extra mags, by carrying two guns with interchangeable magazines. You’ll need to do research about what magazines fit what models. I believe both Glock and Sig Sauer have models where the mags are interchangeable with other compatible weapons. Carrying multiple mags for reloading is something I have always done. Using the same caliber pistol round in both of your concealed weapons is a great way to cut down on having to carry extra mags, assuming the mags are interchangeable.

However, you may prefer two differing types of pistols. Carrying an automatic as your primary weapon, but a revolver as your secondary. Automatics typically hold more ammunition but have many points of failure. Some of these issues can be resolved by simply cycling a round, or changing out the magazine. Others, where feeding the next round causes a jam, are not as easily resolved. A revolver bypasses feeding issues. Sharing the same caliber bullets, allows you to reload using ammo from an extra mag from your primary if the situations permit that kind of time.

There are also various weapons (e.g. Derringer) that are extremely small. The effects of carrying such a small firearm on your day to day activities would likely be negligible. Because of their size, the amount of ammunition that the weapon can hold is low, so make your rounds count.

Where You Carry Matters

Note that all of the below, options for carrying your secondary assume that the location is not taken by your primary, and are positioned to be drawn using your non-dominant hand. For instance, I don’t recommend a cross draw (across your body) option, if you draw your primary this way, such as a shoulder rig. Options for carrying your secondary weapon include:

As with any shooting related skill, the more time you spend honing it on the range, the better off you will be. For this reason, I recommend becoming proficient firing your weapons with either hand.

While it is ultimately up to your level of comfort, I recommend carrying two guns. You never know when you will need a second weapon due to malfunction, or to provide others a means to protect themselves and you. Remember, that no amount of firepower means you are invincible. You should never be overconfident, or complacent when you carry concealed.